Events and festivals in Japan are aplenty, with celebrations deeply embedded into the country’s culture. From religious festivals to fireworks displays, musical concerts to winter illuminations, explore to match your interests – immerse yourself in local culture as you take part in Osaka events and festivals.

As a hotel in Namba, the Swissôtel Nankai Osaka provides ease of access to various modes of transportation within the city and nearby towns. Plan your stay in Osaka and conveniently make your way to these events and festivals!

The turn of winter in Osaka initiates the flicker of lights and holiday cheer, with various Winter Illuminations commencing in and around the city. The famous Namba Hikaritabi and Midosuji Illuminations, both visible from your hotel room in Namba, is a must-add to your bucket list when visiting during the winter.

An annual event spanning across six spots near Nankai’s Namba station, discover thousands of lights and installations spread across Namba Parks, Namba SkyO, Namba Carnival Mall, Namba Parks Street and the Swissôtel Nankai Osaka. The Nankai Building’s façade serves as your gateway to the Hikaritabi journey, a stone’s throw away from the hotel’s entrance.

During your stay at the Swissôtel Nankai Osaka, request for a South view facing room to enjoy the Namba Parks Illumination from your room window.

Festival of the Lights in Osaka – early November to December

An annual festival in Osaka, the Festival of the Lights is composed of two main programmes involving the historical Midosuji Avenue and the Nakanoshima area of Osaka – the Midosuji Illuminations and the Osaka Hikari-Renaissance.

Right outside the hotel, take a walk down the iconic Midosuji Avenue decorated in bright lights for the annual Midosuji Illuminations. The avenue is a 4 kilometer stretch from Namba to Umeda, lined with gingko trees in a sea of sparkling lights during the winter season. After a full day of shopping in Namba, explore Osaka’s equivalent to Champs-Élysées as it glows in a beautiful array of colours.

During your stay at the Swissôtel Nankai Osaka, request for a North view facing room to enjoy the Midosuji Illuminations from your room window.

An art festival of light displayed across Nakanoshima, the symbolic waterway of the city, the Osaka Hikari-Renaissance features a light projection mapping display set against the Osaka City Central Public Hall’s façade. Walk around and discover various light exhibitions covering the pathways along Nakanoshima River and Nakanoshima Street, or take a break in an illuminated bench which also serves as an Instagrammable spot!

For more details on The Festival of the Lights in Osaka, click here.

Other upcoming Osaka Events and Festivals in Winter:

One of the best seasons in Japan, March marks the annual sumo tournament at the Osaka Prefectural Gymnasium (otherwise known as the Edion Arena Osaka), a mere 210 metres away from the hotel. Happening around mid to late March, the Spring Basho is an unforgettable experience which displays traditional Japanese culture through an athletic spectacle.

Visitors also look forward to Cherry Blossom Season, where they can experience a Hanami party – a picnic underneath Cherry Blossom Trees. Here are some of the popular spots for cherry blossom viewing or Hanami parties:

Considered as one of the most popular spots for Hanami parties, the park around the castle is filled with more than 3,000 cherry trees. Its annual light-up event in the evening also makes for the perfect photos, with an array of colourful lights set with the Osaka Castle serving as backdrop. Its wide lawns, lush scenery and cafés within the park serves as an ideal cherry blossom venue for all ages.

A large public park previously known as the venue for the 1970 World Exhibition, this commemorative park is another popular spot with over 5,000 cherry trees. During the sakura season, pop-up shops and restaurants are set up around its massive lawn areas and illuminations are held at night in various sections of the park. Its barbecue spots, pedal boats, museums and nature trails have made the park popular for families, keeping everyone entertained.

Other upcoming Osaka Events and Festivals in Spring:

Immerse yourself in local tradition when you visit Osaka in the summer, with festivals lined up both in the city and surrounding points of interest. Take the opportunity to wear a local Yukata, or watch the night sky light up with fireworks during summer festivals in Osaka.

Considered to be the biggest festival of Osaka City, the Tenjin Matsuri takes place annually and is one of the three greatest festivals in Japan. Various festivities include processions, dances, drum performances and a display of danjiri festival floats.

How to get there (Approximately 20 minutes): From the Swissôtel Nankai Osaka, take the Sakaisuji Subway Line Nippombashi Station (K17) towards Tenjimbashisuji 6-chome and alight at Minami-morimachi Station (K13), 4 stations away.

The festival of Yasaka shrine is the country’s biggest celebration, featuring a grand procession of floats which take place every 17th and 24th of July in Kyoto. Popular amongst locals and tourists, Kyoto’s downtown area is closed to vehicular traffic for three days leading up to the procession as streets are lined with various stalls offering local delights. The festival is traditionally sponsored by kimono merchants, which have led to its attendees to wear yukatas and kimonos as they enjoy the festivities.

How to get there (Approximately 1 hour): From the Swissôtel Nankai Osaka, take the Sakaisuji Subway Line Nippombashi Station (K17) towards Takatsukishi (HK72) and alight at Awaji Station (HK63), 8 stations away. Take the Hankyu Kyoto Line and alight at the last station, Kyoto-Kawaramachi (HK86).

Started in 1989 and popular among the locals, make your way to the festival early to reserve a decent spot to view the fireworks display. From the train station on your way to the venue, the streets are lined up with stalls offering unique Japanese festival food, along with local treats such as takoyaki, yakisoba and karaage, or cool off with kakigori (flavoured shaved ice). There are also reserved seats with options to include a bento picnic box and chilled drinks, for those who wish to be guaranteed a spectacular view.

How to get there (Approximately 19 minutes): From the Swissôtel Nankai Osaka, take the Midosuji Subway Line Namba Station (M20) towards Senri-Chuo (M08) and alight at Nishinakajima-Minamigata Station (M14), 6 stations away.

Happening in Maishima Sonic Park, Summer Sonic Osaka is one of the country’s biggest music festivals with both local and international performers. The festival began in 2000 and has had a star-studded lineup over the years, with acts to include Zedd, Red Hot Chili Peppers, Beastie Boys, Coldplay, The Chainsmokers, BLACKPINK and Avril Lavigne.

How to get there (Approximately 1 hour): From the Swissôtel Nankai Osaka, take the Hanshin-Namba Line Osaka-Namba Station (HS41) towards Amagasaki (HS09) and alight at Nishikujo Station (HS45), 4 stations away. Exit the station and proceed to the adjacent bus stop for Bus 81, heading to Maishima Sports Island.

*Shuttle buses may also be made available from Nishikujo at the discretion of the event organisers.

Other upcoming Osaka Events and Festivals in Summer:

The yellow and orange hues take centerstage on your visit to Osaka in autumn, with the peak of the season happening in mid-November.

An 8.8 hectare park which rewards you with the cascading 33-meter Minoo Falls at the end of the trail, the entire area is filled with autumn leaves in golden hues. Bring a bento box and enjoy a picnic with friends and family, or take a seat in one of the benches and engage in light reading. This must-visit location in Osaka’s Mino City is lined with shops selling fried maple leaves right by the park entrance – make sure to try it out or bring home as a souvenir!

A famous sightseeing spot easily accessible from Swissôtel Nankai Osaka, the changing of the seasons provide a different atmosphere which entices visitors to keep coming back year round. Take the Sagano Romantic Train to conveniently enjoy breathtaking views, or go on a mini-adventure by taking a boat ride from Kameoka.

Another spot accessible from Osaka, head to Hyogo and be in awe with scenic vistas of autumn leaves from 500 maple trees and 100 wild cherry trees, with an observation plaza at an altitude of about 400 metres. Take a moment, enjoy a picnic, or make your way around Japan’s largest herb garden.

Other upcoming Osaka Events and Festivals in Fall:

View all photos
Book a room 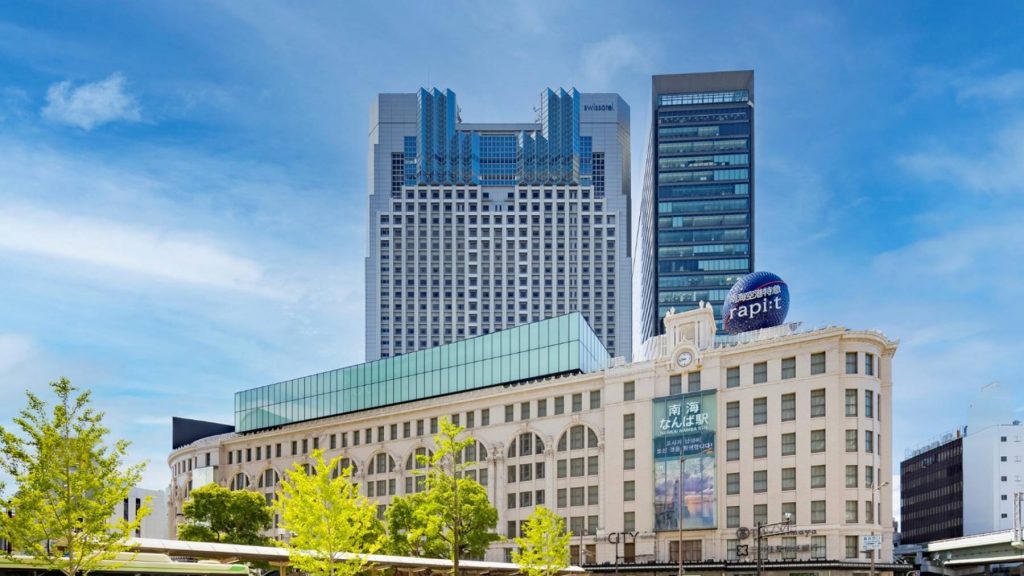 The Swissôtel Nankai Osaka has been independently certified by the Environmental Health Consultancy (EHC) for being fully compliant with ALLSAFE, Accor’s enhanced health and safety protocols. Click here for more details about our initiatives.


The best of Swissôtel with Accor App Close